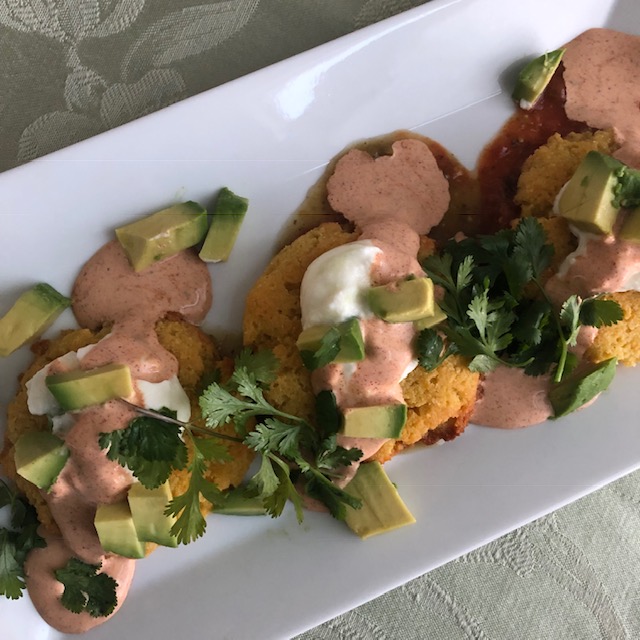 The Cheesecake Factory has always been one of my absolute favorite chain restaurants, but not because of their cheesecake! I’m actually not a huge fan of theirs. Actually, I’m not a huge fan of cheesecake in general. I know, shocking, right?! Who isn’t a fan of cheesecake?! What I love about The Cheesecake Factory is their HUGE menu! And they’ve done a pretty good job in recent years of expanding their gluten free menu as well. Now, my favorite dish on the menu, the Southwestern Corn Cakes, can be made gluten free. That wasn’t the case a few years ago, when I initially set out to replicate this dish as gluten free!

Stonyfield Yogurt makes another appearance with their fabulous organic yogurts! Top those bad boys with a serving of my spiced yogurt sauce and you’re ready to introduce your palate to the wonders of the American Southwest!

In addition to these Southwestern corn cakes, I served both the Chicken Enchilada Quiche that I featured yesterday on the blog and an Apple Sangria. Grosche generously provided me with the perfect Sangria pitcher! It’s an infuser pitcher, so it’ll filter out all the fruit you happen to fill it with! It also makes some amazing flavored waters or iced teas! I see this pitcher being used constantly come summer. Cucumber water, hibiscus teas, mint mojitos! Oh, the possibilities!

As we wrap up #Easterbrunchweek, I hope you’ve enjoyed all the wonderful recipes we’ve provided you with! Remember to enter the #EasterBrunchWeek giveaway below! You’ll be in the running for some of the same products I’ve featured all week long as well as some additional surprises! So as we come to a close, comment below, what was your favorite recipe of the week?

P.S. Join Frugal & Fit in a few weeks for #SummerGrilling week! We’ll be showcasing some great summer-themed recipes May 13-18th! 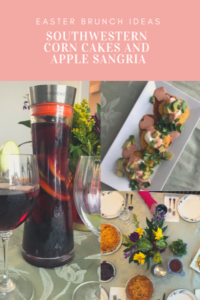