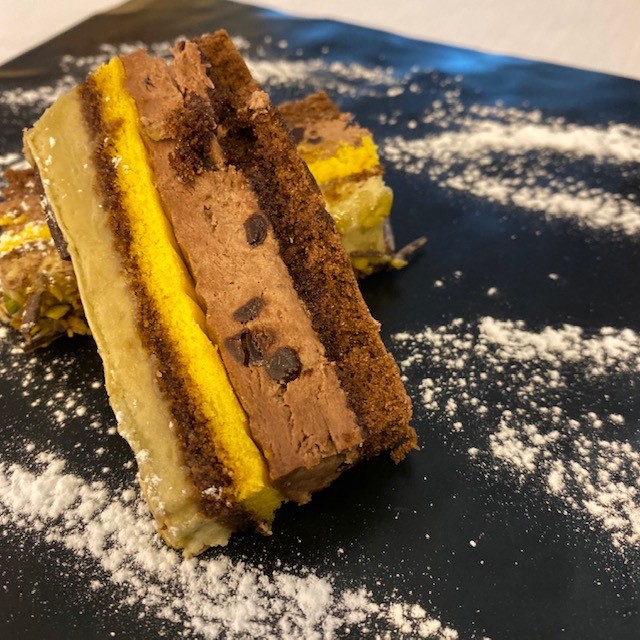 We’re back from our two week adventures in Europe! And what a whirlwind it was! From the hectic streets of Rome to the snow covered peaks of the Bavarian Alps, we couldn’t have asked for a more beautiful Christmas experience. But let’s start with our week in Rome. We saw all the sights in Rome and ate more pizza and gelato than I thought humanly possible. And it was all gluten free!

I think the biggest takeaway from our time in Rome is, don’t be afraid to visit Italy with food allergies. Especially gluten free. Italians actually have a high population with celiac disease so gluten free offerings are literally everywhere! And if it’s not immediately advertised (I saw many signs outside restaurants advertising gluten free), pop in and ask a manager! We did that more than once and the answer was usually yes, they could make us dishes!

Beware the gelato shops though. While many advertise gluten free gelato, it’s not necessarily a safe option for celiacs. We stopped by one last week that had “gluten free” flavors interspersed with gluten flavors, like Oreo and tiramisu. I give you three completely safe options in part two of my Rome series to consider if you’re looking for gelato, including one that has lactose free and egg free flavors!

So, here we go! We ate all the top Roman dishes and all gluten free. From arancini to pizza, follow this guide for the best gluten free food Rome has to offer. 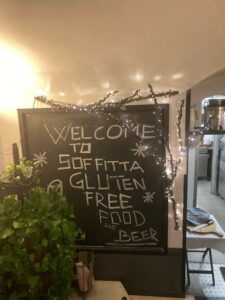 Hands down, this was our favorite. We dined here twice in 5 days. I have never had such amazing gluten free pizza. La Soffitta, can I spend the day with your chef? They can make anything on the menu gluten free, from fried appetizers like suppli (fried rice balls) and zucchini flowers stuffed with mozzarella, to the most amazing pasta dishes and crunchy, light pizzas. You can’t go wrong with anything on the menu. They even have multiple gluten free desserts that rotate on a daily basis. 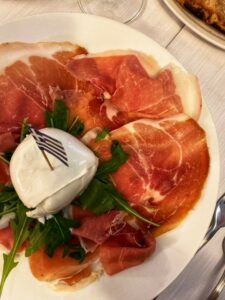 And don’t even think of passing up the focaccia bread they offer you. 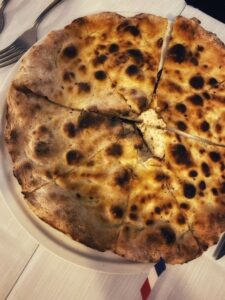 All their dishes arrive with a little flag in them, denoting your meal as gluten free. 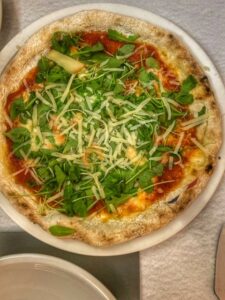 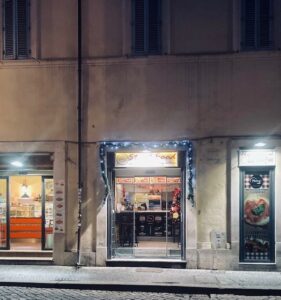 Over by the Vatican, this tiny hole in the wall puts out the most tender arancini rice balls you’ll ever eat. And trust us, we had the best AND the worst on this trip. Try a combination like we did. They have several different kinds. And get a small, trust us. It’s huge and you need to save room for the zeppole. We ended up with the Cuoppo Terra, which was a paper cup filled with fried vegetables, coquettes, suppli, and zeppoline (which was like their doughnut holes, but unsweetened). 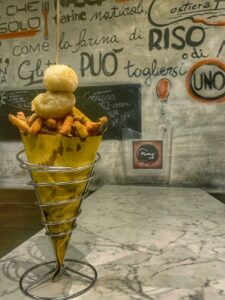 We also ordered zeppole, covered in cinnamon sugar and Nutella. The entire restaurant is gluten free so order away! 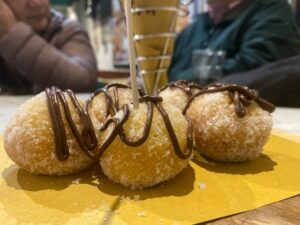 If you’d prefer a sit down restaurant, try Mama Eats over in the Travestere neighborhood. We didn’t get over to the restaurant, but I’ve heard it’s amazing. They have a completely separate kitchen for gluten free too! No cross contamination! 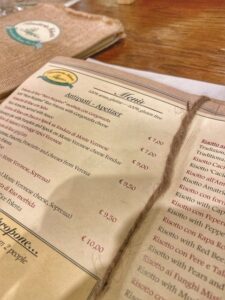 This was our last stop in Rome before we headed to Austria. They specialize in all things rice. So from the focaccia to the tiramusu, it’s all made of rice flour! We tried two different risottos (their signature dish), and they brought us warm rice cakes and focaccia bread to start. We didn’t end up trying the tiramisu here, but it sounded amazing with a plum cake base. If you try it, let me know how it is! And the restaurant is just darling with all kinds of different rice decorating the walls. 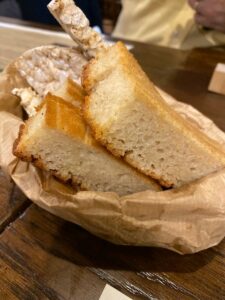 The saffron and peppers risotto is to die for. I highly recommend it! 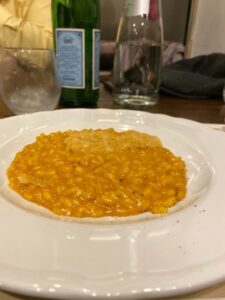 We also tried the traditional risotto which featured pork and veal and came in a traditional metal pot. Oh so cute! This restaurant has a few different locations around the world, including one in NYC! Next time we’re in New York, I’d definitely pop in! 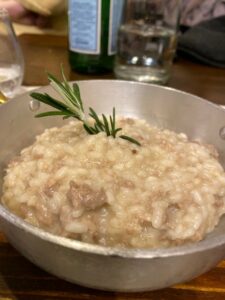 *I also want to note that service was the best we had in Rome. Our waiter was friendly and accommodating, offering suggestions on dishes to try. This was definitely a plus in a city that came off as slightly brusque to our family. 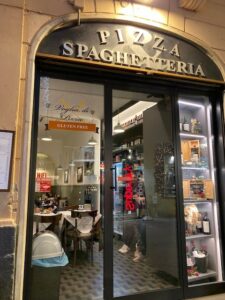 After spending several days in Austria, we came back to Rome for 48 hours before catching a flight back to the US. Our last night in Europe, we headed to Voglia di Pizza because we had heard it’s one of the best gluten free pizzas in the city! The menu can be made gluten free or not (perfect for our family since we’re not all gluten free). While I personally wouldn’t call it the best pizza in town (that honor goes to La Soffitta), it’s definitely better than any gluten free pizza I’ve ever had in the States. 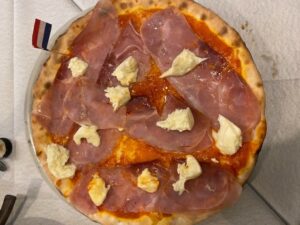 Voglia’s pizza is much more like a Naples type pizza than a Roman pizza. Very thin crust and crunchier. It’s also more saucy than Roman pizza usually is. So, while it wasn’t our favorite, maybe it’ll be yours! Depends on what type of pizza you prefer 🙂 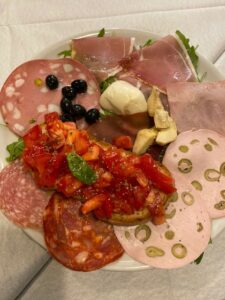 Their antipasto plate with gluten free bruschetta was wonderful though. With a large mixture of cured meats and some delicious cheeses, it was a hit!

Their desserts were excellent too. We tried both gluten free desserts they were offering that night. I’m not sure if the desserts rotate or if they only ever have two. But the cheesecake and the tiramisu were both solid choices. While they called it cheesecake, it’s not your traditional American type cheesecake. It was more a ricotta pie consistency with jam and a shortbread like crust. It was delicious! Just don’t expect the Cheesecake Factory! The tiramisu was delicious and had an espresso flavor like one would expect. It was a bit denser than normal tiramisu but that could have been because of the gluten free substitutions. 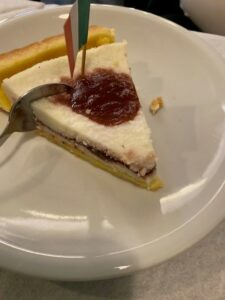 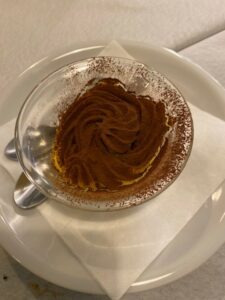 Overall, we enjoyed Voglia di Pizza and would recommend it if you have time. The restaurant is a bit sterile and not as quaint as some of the other restaurants we went to in Rome but it’s in the heart of the city and the neighborhood is quite charming, especially decked out for Christmas! 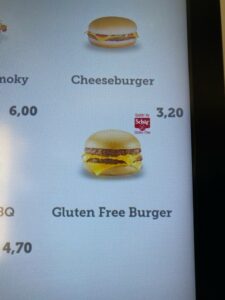 Both of our hotels (The Grand Ritz Roma and Hotel Adriano) offered many gluten free options! And they rotated throughout our stay. I’d recommend either hotel for the gluten free traveler. I did NOT find the same level of care in Austria. It was practically non-existent. 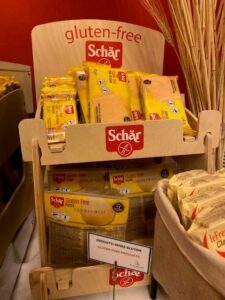 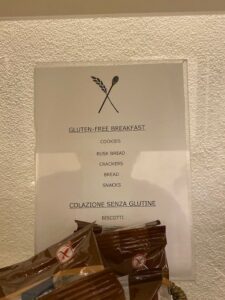 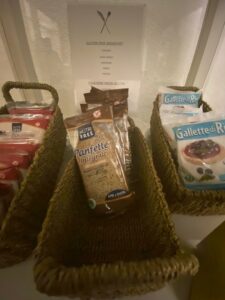